What’s the common ingredient in whiskey and economic development? Water.

Let me explain. I recently traveled to Tennessee with my husband.  He is a fan of whiskey, so we made the pilgrimage to Lynchburg, where Jack Daniel’s is made.  The small town is a 90-minute drive south of Nashville.

I work for a water engineering firm, so I can’t help but notice the tap water wherever we travel – its flavor, color, source, etc.  Since I’m not a big fan of hard liquor, it makes sense that I was more interested in the water used to make Jack Daniel’s whiskey than I was in the finished product. 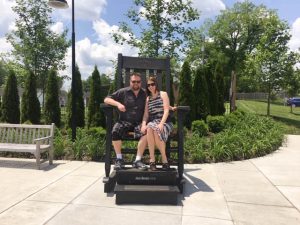 Scott and Heather at the Jack Daniel’s Distillery in Lynchburg, TN.

“A $2,148 investment in water more than 150 years ago is keeping an entire town afloat today. If that’s not a powerful argument for investing in water, I don’t know what is.”

On the tour of the distillery, we learned Jack Daniel purchased Cave Spring Hollow and its surrounding land in 1866 for just $2,148.  The tour guide called the water from Cave Spring Hollow the “lifeblood” of Jack Daniel’s whiskey.  This is because the water comes from a spring way below the cave’s surface and has a constant water temperature of 56 degrees.  Standing next to the cave was like a cool blast from an air conditioner in the Tennessee heat.

The water from Cave Spring Hollow is naturally treated by limestone which adds minerals and removes iron from the water.  Of course, nowadays it goes to a water treatment facility before making its way into the whiskey that gets shipped all over the world. But it wasn’t always that way.

One could easily argue that Jack Daniel’s wouldn’t be as successful without the spring water from Cave Spring Hollow.  And the town of Lynchburg would not exist as it does today without Jack Daniel’s.  The economic development benefits are obvious. The distillery employs more than 400 people, many of whom come from generations of people who also worked there.  Lynchburg’s retail and service industries depend on the tourists who flock to Jack Daniel’s each year.  The town’s Main Street is lined with souvenir shops and restaurants.

A $2,148 investment in water more than 150 years ago is keeping an entire town afloat today.  If that’s not a powerful argument for investing in water, I don’t know what is.